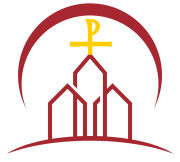 About Us, Beliefs & Church History

Here at Christ The King Lutheran

We don’t care what you wear to church or what you look like; we just want you to join us so we can share the Good News of Jesus Christ with you.  Christ The King (CTK) Lutheran Church and The Lutheran Church—Missouri Synod (LCMS) – with the universal Christian Church, CTK and the LCMS teaches and responds to the love of the Triune God: the Father, Creator of all that exists; Jesus Christ, the Son, who became human to suffer and die for the sins of all human beings and to rise to life again in the ultimate victory over death and Satan; and the Holy Spirit, who creates faith through God’s Word and Sacraments. The three persons of the Trinity are co-equal and co-eternal, one God. Being “Lutheran” our congregation accepts and teaches the Bible as the inspired Word of God. We are called Lutheran because we accept the teaching of Martin Luther that inspired the reformation of the Christian Church in the 16th century. The teaching of Luther and the reformers can be summarized in three short phrases: Grace alone, Faith alone, Scripture alone.

Grace Alone
God loves the people of the world, even though they are sinful, rebel against Him and do not deserve His love. He sent Jesus, His Son, to love the unlovable and save the ungodly.

Faith Alone
By His suffering and death as the substitute for all people of all time, Jesus purchased and won forgiveness and eternal life for them. Those who hear this Good News and believe it have the eternal life that it offers. God creates faith in Christ and gives people forgiveness through Him.

Scripture Alone
The Bible is God’s inerrant and infallible Word, in which He reveals His Law and His Gospel of salvation in Jesus Christ. It is the sole rule and norm for Christian doctrine.

Who is Jesus?
For more than 2,000 years people have asked this question. We were not present when Jesus lived on this earth, but in the Bible we have the record of His birth, life, death on the cross, and resurrection. Study of the Bible, God’s Word, will enable you to seek out the answer to this age-old question. We believe that Jesus Christ is the Son of God, true God and true man.  We also believe Jesus Christ is the only way through which our relationship with God is restored, “Salvation is found in no one else, for there is no other name under heaven given to men by which we must be saved.” Acts 4:12.

What is Baptism?
Baptism is not just plain water, but it is the water included in God’s command and combined with God’s Word. What’s so special about a handful of simple water? Nothing, until God connects His Word to it! In Baptism, that is exactly what God is doing. He combines His life-creating and life-giving Word with the waters of Holy Baptism, and thereby we are born again of water and the Spirit (John 3:5).

Why do we baptize infants and young children?
They are baptized for the same reason adults are baptized— because of the command and promise of God. What is promised in Baptism is given to all who receive it; therefore, infants and young children also have the promise of God. They, too, are made children of God. They, too, are included in the words “all nations” (Matt.28:19). Jesus specifically invites little children to come to Him (Luke 18:15–17). But most important, as sinners, infants need what Baptism gives.

By His word, God created all that is seen and unseen. By His word, our Lord Christ called a dead man from the tomb (John 11:43–44). The unborn child, John the Baptist, leaped in his mother’s womb when he heard the word of God (Luke 1:41–44). Why is there any doubt that in and through the Word and the promise of Baptism, God works a similar gift of faith in the infant? If we misunderstand Baptism to be our work, then we will always cast doubt on it. When we recognize that it is not our work, but God’s gracious promise and work, we realize that infants are to be baptized and receive the treasures offered in and through Baptism.

What is Jesus giving us in the Lord’s Supper?
In the Sacrament of the Altar, our Lord and Savior is continually distributing to us the body and blood of the sacrifice He made for us, the sacrifice by which He paid for the sins of the entire world. Thus, receiving His body and blood, we receive forgiveness, life and salvation. Flowing from these tremendous treasures of God’s mercy are the love, peace and hope that He gives us in His Supper, and the ability and desire to do God’s will, living in love and harmony with others.

How is Jesus present in His Supper?
We do not try to explain how Jesus is present under the bread and wine of the Lord’s Supper, rather we believe, teach, confess, and rejoice that He is present. We Lutherans let the words of Jesus stand without arguing about their possibility, or trying to explain how they are true. As Luther put it so clearly, “We maintain that the bread and the wine in the Supper are the true body and blood of Christ” (SA III.6). Everyone who communes receives into their mouths the body and blood of Jesus Christ, whether they believe it or not, be they worthy or unworthy.

Jesus’ Word is sure and certain. The Holy Spirit gives us faith to trust in and believe Jesus’ words, “Given and shed for you for the forgiveness of sins.” Faith in Christ’s promise is what makes us worthy to receive His Supper. Christ’s words of institution retain their validity and efficacious power and thus, by virtue of these words, the body and blood of Christ are truly present, distributed and received.

“Why We Believe” is a seven-week class focusing on the foundations of our faith in Christ. This class is a presentation of the Christian faith, consistent with reason and grounded in reality. It also serves as our new member class, so you will see it advertised as “Why We Believe” (Membership Class, formerly known as the Good News class). It is not just for people joining CTK. It is designed for everyone! A two-week Discipleship Class follows this class (there is no cost for either class). We ask that you register by calling or emailing the church office. 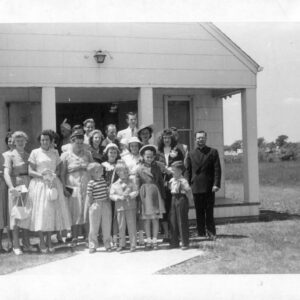 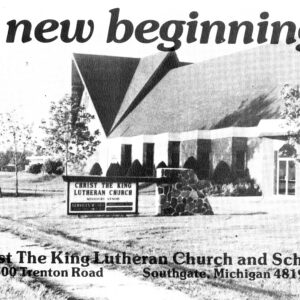 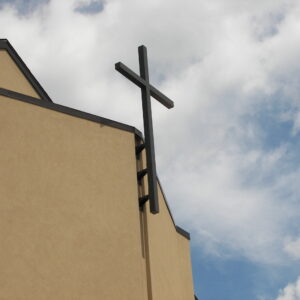 Jan. 1951 – Rev. W. Leroy Biesenthal accepted the District Call to be the Minister of a new congregation on Trenton Rd.

Feb. 29, 1960 – Pastor Biesenthal granted a “peaceful” release from CTK to accept a call at Trinity Lutheran in Utica MI

September 2006 – Tours of the PA Rd. campus were given to members

June 1, 2014 – Ceremonial Groundbreaking for PA Rd. new Sanctuary Project. City officials, VS Vig Construction and architect to be in attendance

2016 – Day school began work for school accreditation.  Preschool and Daycare became one program with all of the 3, 4 and Early 5 year olds

March 18, 2020 – All services (Lent, Easter and Sunday AM) are streamed via Facebook due to lockdown. There is no in-person worship

We would love to meet you!
Worship Times 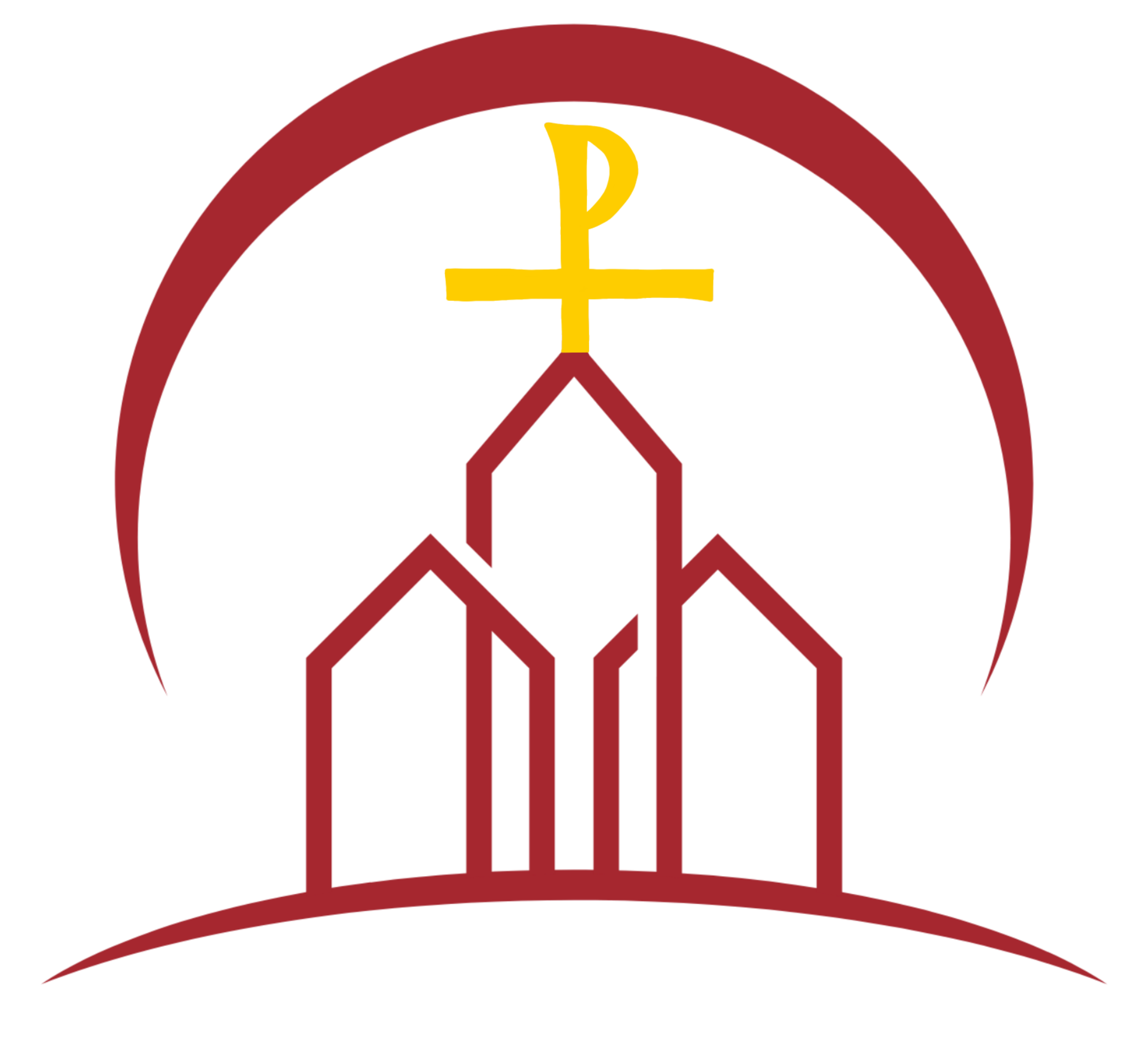